Hi Friends,
Some good news arrives this month! We have two important planets (Mercury & Mars) that will be moving forward in November. Both of these of planets have been holding the energy down, especially Mars which represents drive and determination and has been retrograde since September 9th. When Mars in Aries is retrograde it’s like trying to walk through mud that is about knee deep. Mercury of course represents our thinking and communication, as I’m sure many of you know by now, Mercury retrograde tends to bring our thoughts back into the past. With just these two planets moving forward we could expect this month’s energy to improve significantly.

The second half of the month appears to be more intense than the first half that’s because we’ll have Mercury entering Scorpio, Mars going direct, a New Moon in Scorpio, Venus enters Scorpio, and the transition of the Sun from Scorpio into Sagittarius, and finally, a Full Moon Lunar Eclipse in Gemini at the end of the month. This is sure to be a very passionate and vocal month for many. As we begin November the Sun continues to visit transformational Scorpio, shining a light on passion, intensity and depth. Many of the discoveries that are going on in the political arena have a lot to do with the Scorpio energy. The sign of Scorpio represents the underworld, shady dealings, corruption, power, lies, and death and rebirth. All of which we are seeing in the United States with the presidential election this year.

On November 3rd Mercury goes direct in Libra. Mercury began its retrograde cycle on October 13th in the sign of Scorpio then back tracked into Libra on October 29th. When Mercury was retrograde in Libra, our key focus was on finding internal balance and harmony—learning from where that harmony was missing and figuring out how to do things differently next time. The astrologically natural idealism of Mercury in Libra was directed inwards towards our own psyches, rather than outwards into the world. That trend now continues in an outward manner as Mercury begins to move forward in this sign.

On November 11th, Mercury moves into a penetrating Scorpio and changes its dynamics completely. With Mercury now in this very intense and passionate sign we can now look forward to a period of regrouping and reorganizing. Once that is accomplished, we can clean up all those scattered details that have been clouding the picture for the last few weeks. Over the next few weeks answers to questions will become clearer. We will be thinking, once again, about issues we care deeply about.

The momentum returns on November 14th as Mars turns direct in Aries. It’s been difficult to push ahead with ambitions and plans while Mars has been retrograde, and many of us have felt rather listless and stuck. We may have suffered from a lack of self-confidence or from overly harsh self-criticism, depending on your sign and birth chart. However, the retrograde period also had its benefits – during Mars retrograde, some folks have been able to process past traumas and to address mental and physical health issues. Now that Mars is turning direct, the energy shifts subtly once more as we begin to pick up energy. Over the next few weeks our ambition, leadership and bravery associated with Aries will begin to return. The down side to Mars in Aries being unshackled is impatience, ego, anger and recklessness, but hopefully for most of us it’s the more positive vibes of this transit which will prevail!

This month’s Scorpio New Moon also falls on November 14th suggesting a time of rebirth and reinvention. This lunation emphasizes a new beginning in the fixed water sign of Scorpio. It’s a time when we can focus on some of the constructive traits of the sign of the Scorpion–passionate, resourceful, focused, probing, deep, and perceptive–and consider how to positively incorporate these qualities into our lives. Scorpio New Moons are generally good for working on our self-mastery skills. We may want to pinpoint the things in our lives that make us feel out of control, such as addictions and debts, and work on freeing ourselves of these emotional burdens. This New Moon cycle is also an opportune one to explore what is missing in our lives that leads us to engage in these self-destructive behaviors.

One of Scorpio’s “lessons” involve learning to dig deeper into the mysteries around us instead of always being content with status quo. Taking the time to understand others’ motives can enrich our feelings of intimacy, forgiveness, and sense of meaning. Scorpio also teaches us that dedication to one meaningful relationship or undertaking can be significantly more satisfying than spreading ourselves around. Here, “quality over quantity” applies. We might want to use this cycle to work on focusing on and developing one special project or relationship in order to help add purposefulness and depth to our lives. 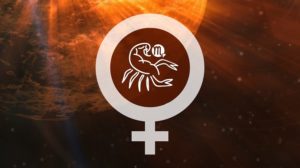 The passion is turned up even more on November 21st as Venus enters Scorpio as well. Venus in Scorpio is perhaps one of the most sensuous of all planetary placements. Here our Lady of Love is more than at home giving physical expression to her deeply felt emotions. Scorpio energy can be intense and obsessive so when our feelings of love get combined with this sign, we can expect a pretty permanent attachment. Total fixation is more like it. All is well as long as the object of our affections returns the feelings with the same level of intensity. If they slack off just a bit, those amorous attentions can just as easily turn into jealousy and resentment. Venus in Scorpio does not let go easily, physically or emotionally.

Later on that day, optimism and curiosity return when the Sun enters Sagittarius. As we move toward the last month of the year, the Sun highlights the sign of the Centaur – half man and half horse. The man half aims his arrows high while the horse half carries him from one adventure to another. Sagittarius is a mutable fire sign, full of energy and inquisitiveness and a need to roam free. While the Sun is in Sagittarius, we tend to focus on lofty principles and on enthusiastically leading the way. We want to share our profound wisdom with those around us — as long as they don’t try to tie us down. “Don’t fence me in” comes directly from the heart of Sagittarius. 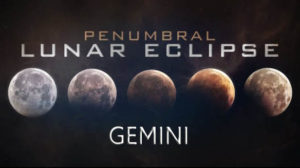 We end the month off with a bang as the Full Moon/Lunar Eclipse in Gemini occurs on November 30th. This lunation is much more powerful than a regular Full Moon; it’s an ending cycle or completion cycle that is much longer in length. A lunar eclipse occurs when the moon is full and its light is blocked by the earth’s shadow. Traditionally speaking this is a time of fruition and harvest, but when eclipsed it heralds, instead, hidden fruits and obscured results. Nothing is quite as it seems.

Since this lunar cycle will be in the sign of communication and thought we will find ourselves needing to release old ideas and beliefs that no longer serve us. Mercury is the planet associated with Gemini and since Mercury is now visiting transformative Scorpio, This will therefore be an especially propitious time to reset our intentions and realign our thinking with the truth (which always sets us free). We will work together to release and transmute old emotional patterns as well, as core beliefs that are no longer productive for us will begin to fade away. Don’t miss what promises to be an evening of deep mental and emotional empowerment at an especially auspicious celestial moment.

Hi Friends, 2020 is finally behind us and what a year it’s been; it is one for the history books for sure. Our lives have been changed, whole industries have collapsed (at least in the short term), we learned to live without overseas or even local travel, we’ve had to...

END_OF_DOCUMENT_TOKEN_TO_BE_REPLACED

Hi Friends, What a year it’s been….here we are at last month of 2020 getting ready to embark on some major changes. Yes, more changes, we have lots of significant cosmic activity in December. A philosophical and spiritual Solar Eclipse, two major planets switching...