Hi Friends,
As you can tell it seems like most of humanity has lost its sense of reality these days. One of the obvious reasons is the virus, but the other factor is the tremendous amount of astrological movement in 2020. Many astrologers including myself have tried to point this out since the beginning of the year and this month is a whopper. You’ll want to bucket up in June, get centered, and do some serious meditation. The month begins with the first of three eclipses followed by Mercury retrograde (fifth planet in retrograde) then a Summer Solstice Solar Eclipse in Cancer, a sixth planet goes retrograde, and finally the second Jupiter Pluto conjunction. This is very powerful energy that is encouraging us to sit still and take a long hard look at the changes within.

June is not a good time to force any issues or make any major life changing decisions because our judgment and emotions will be all over the board. We’ll be focusing our attention on the past hoping to find some sort of meaning or sense to what is happening. With six planets in retrograde this month, June is a time of personal transformation, re-evaluation and rejuvenation, while the eclipses point us into a new direction. The first few days may feel a bit uncomfortable thanks to the Lunar Eclipse in Sagittarius, plus the Sun and Venus will be squaring Mars and Neptune. Venus, Jupiter, Saturn, and Pluto will all be in retrograde mode. We’re in for a very very tricky month.

The first eclipse will occur on June 5th, and it’s going to be a Full Moon Eclipse in Sagittarius. The Fire element of this sign warns us that this eclipse will put us to test. This lunation will be visible in the much of Asia, Australia, Europe, and Africa. This Lunar Eclipse is suggesting we need to work to improve our relationships. It’s a time to open up our hearts or to bring something to light that has been hidden. It’s also a time of completion where a cycle has run its course.

Unfortunately, this Eclipse is impulsive and irritated because the Moon will be squaring Mars. The Moon is also opposing Venus retrograde which is not a good omen for love relationships. Strong relationships will withstand the test through patience and unconditional love. However, this lunation poses a real threat to strained relationships, impatience, concerns over financial matters, and lack of self-control could turn harmony to disgust, resulting in impulsive actions and hostility. Anytime there is a powerful Lunar Eclipse making a tough alignment to Mars, there is always a risk of war, conflict and even the possibility of an earthquake or two. 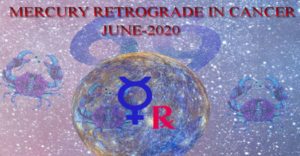 The month of retrogrades continues on June 18th when Mercury begins its backward motion in Cancer. For a few days before and after this retrograde we may feel a great deal of confusion whenever we try to reason something out. As if we don’t have enough to be confused about these days; it will feel as if our well-laid plans are going off to never-never land and we won’t have a clue as to why. It will be like we are operating on automatic pilot as we follow our feelings and emotions. Once Mercury gets moving in its backwards mode, though, it will be a good time to really listen to what those feelings are all about. We’ll be able to see them very clearly when this retrograde is over on July 11th.

The second powerful eclipse of the month occurs on June 21st, which also marks the Summer Solstice in the northern hemisphere. This Solar Eclipse in Cancer represents a propitious moment for letting go of the past; however, Cancer is a very nostalgic sign, having a hard time letting go of the known, furthermore, with five planets in retrograde it may be difficult to figure out what the future holds. Since Cancer rules emotions and feelings, we may find ourselves dealing with situations that are very unsettling. This eclipse will certainly continue transforming the United States as it was born under the sign of Cancer (July 4, 1776). This is a major a turning point for the USA as we will see significant changes within the next six months to a year.

The sixth planet to go retrograde this month occurs on June 23rd as Neptune goes retrograde in Pisces. In astrology, Neptune is known as the planet of dreams, imagination, and creativity. Because it’s so far away from Earth, its retrograde transits don’t affect us as dramatically as, for example, Mercury retrograde. Being one of the slowest and further planets in the solar system, Neptune’s effects are subtle and only revealed over time, and when closely connecting to any of the natal planets (Sun, Moon, Mercury, Venus, and Mars) in a birth chart. During Neptune retrograde we will find ourselves digging deeper into our souls looking for meaning and understanding. Its reversal is all about dissolving the ego while driving it to find deeper meaning in the spiritual world. 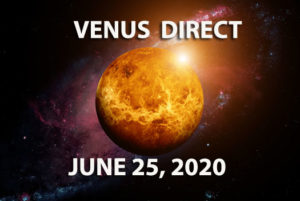 Our relationships begin to change on June 25th as Venus finally moves direct in Gemini. This Venus retrograde period began on May 13th in the sign of Gemini, signaling a time to review our needs and desires. Values can change when Venus is retrograde, as can the creative process. She stations direct on June 25th, helping us to move forward with newfound understandings of ourselves and others. Since Venus is also associated with money matters, we will begin to see an improvement in economies or currencies around the world.

Our desire to move forward accelerates on June 28th when mighty Mars blasts into the sign of Aries. A true home for the Warrior planet. Mars in the fire sign of Aries is at his best. The Aries desire to get things moving is just the right place for the planet that has all the physical strength to make it happen. We’ll all feel a surge of energy while Mars visits this first sign of the zodiac. It’s as if we’ve all been working out at the gym for a while and have these tremendous reserves we didn’t know about. We’ll have to watch out for being overly feisty and impulsive though. Neither this sign nor this planet is known for realizing that other people have needs too or that there are diplomatic ways of getting what we want. Let’s hope the impulse to reach out and touch others is not in an inappropriate way. 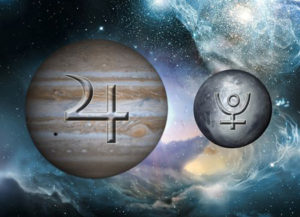 Finally, we have the second Jupiter Pluto conjunct in Capricorn on June 30th. These two heavyweights first met up on April 4th right in the middle of the corona virus situation and we witnessed firsthand the powerful transformations occurring to society. This transit usually emphasizes justice and the law (Jupiter) and transformation (Pluto) and we continue to see all of the societal changes that are occurring right before our eyes. The last time Jupiter and Pluto met up in Capricorn was in 1771 and a few years later we had the declaration of independence in the United States. The States don’t seem to be united right now, but make no mistake, by the last conjunction of these two planets on November 12th we will see significant changes here in the US and possible the world.